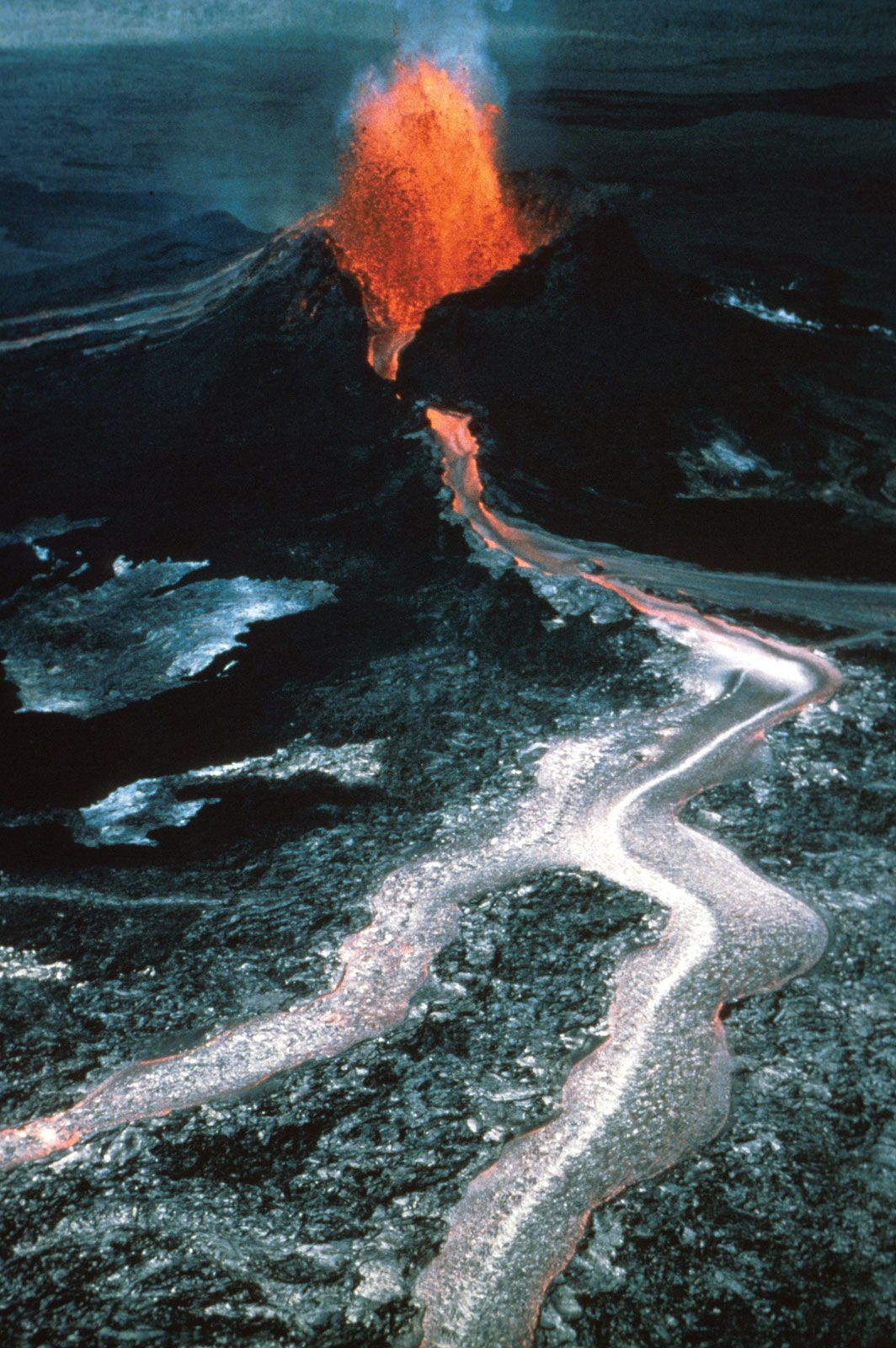 Earlier this week, there was a Mauna Loa volcano eruption in Hawaii, which is now threatening the lives of hundreds of thousands of people. In addition to disrupting air travel, this eruption could also cause damage to homes and businesses. As a result, the Hawaii Emergency Management Agency has raised the alert level to warning. Unlike past eruptions, the location of the eruption and the extent of the lava flows are changing rapidly. In addition, this eruption follows two previous eruptions that have already occurred on the island.

Location and advance of lava flows can change rapidly

During an eruption of the Mauna Loa volcano, location and advance of lava flows can change rapidly. Lava can move out of the summit caldera and into the rift zone. The rift zone is where mountain rock is cracked and the magma rises to the surface. As the lava flows, winds can carry volcanic gas and fine ash downwind.

An eruption of Mauna Loa can also produce long-traveled lava flows, which can be hazardous to nearby communities. This is especially true if lava is descending a steep slope.

The lava strands that have been formed are very sharp and can pose a threat to eyes and skin. They can also be carried downwind, which could be hazardous to residents. This is why authorities are encouraging people to prepare for potential impacts. They also recommend that residents with respiratory sensitivities take extra precautions.

Aerial reconnaissance from the Hawaiian Volcano Observatory will be conducted to assess the eruption’s potential hazard. HVO will also work with the Hawaii County Civil Defense and Hawai’i State Emergency Management Agency. The observatory will also monitor the volcano closely.

Hawaii County officials have said they are not calling for mandatory evacuations at this time. They have urged residents to review their preparedness plans and to heed the advice of the Civil Defense and State Emergency Management agencies.

During the Mauna Loa eruption, fissures on the east and west flanks of the volcano have opened up. These fissures are feeding lava flows upslope from the Mauna Loa Weather Observatory. They have also closed high-elevation areas of Hawai’i Volcanoes National Park.

The main section of Mauna Loa park remains open. Residents who are at risk should refer to the Hawaii County Civil Defense and Hawai’i County Emergency Operations Center for more information.

The United States Geological Survey issued a notification of a Mauna Loa eruption Monday. According to the USGS, the eruption is in its early stages. It will take time to assess the direction and advance of the lava flows. However, all indications are that the eruption will remain within the Northeast Rift Zone.

Previous eruptions have preceded this one

Located on the Big Island of Hawaii, Mauna Loa is the largest active volcano on the planet. Mauna Loa is known for its frequent eruptions. In fact, it has erupted 33 times since 1843. These eruptions have been very active and intense. Most of these eruptions are short, although one lasted for three weeks.

Seismic monitoring has improved with better data analysis and the addition of more seismic stations. The USGS Hawaiian Volcano Observatory has switched from using ground-based instruments to using GPS and interferometric synthetic aperture radar to monitor activity. The new monitoring methods have improved the accuracy of the data.

The volcano’s recent earthquake activity has prompted officials to warn residents of the volcano and surrounding areas to prepare for an eruption. Hawaii County has not ordered any evacuations but the county has opened two shelters. Those who live in the areas below the volcano are advised to monitor the NPS website.

Mauna Loa has been relatively quiet since the 1980s, but has been active for periods of heightened unrest during the past three years. This recent episode of unrest has been particularly pronounced in 2019. Some of the aspects of unrest are similar to previous eruptions, but other aspects have been different.

Several factors contribute to the eruption’s uncertainty, including the volume of lava that will be produced, the duration of the eruption, and how long the lava flows will remain active. Mauna Loa’s eruptions are known to be explosive and fast-moving lava flows.

Earlier this week, the Hawaiian Volcano Observatory upgraded the Volcanic Activity Alert Level for Mauna Loa to WARNING. However, the Observatory cautions that this does not mean the eruption is imminent.

According to the observatory, the volcano has been showing signs of increased activity in September and October. The observatory will continue to monitor the situation and update the public as it develops.

The lava flows that are currently flowing are likely contained within the walls of the Moku’aweoweo caldera. However, it is important to be prepared for the possibility of a lava flow.

Residents should continue to be vigilant and take precautions, including watching for the warning signs of low air quality and vog. The Observatory and Civil Defense will keep the public updated on any changes in the situation.

The Observatory reports that the Mauna Loa eruption is not affecting air travel to Hawaii. However, travelers should check the Hawaiian County Civil Defense updates.

A recent swarm of earthquakes, along with heightened activity at the summit of Mauna Loa, prompted scientists and officials to get a closer look at the volcano. They were able to detect a large number of small earthquakes in two hours.

An ashfall advisory was issued for the Big Island overnight. However, it was cancelled at about 9 a.m. The National Weather Service reported that up to 0.6 centimeters of ash could accumulate in some areas.

The Hawai’i County Civil Defense Agency has opened shelters in Kailua-Kona and Pahala. They have also issued daily updates on the volcano’s activity. Those living on the slopes should review their preparations.

Mauna Loa’s location can change rapidly, so it is important to be prepared. The eruption could be confined to the summit area, or it could spread out to the steep slopes of the volcano.

The Observatory and Civil Defense are working closely with the communities to prepare for the eruption. They will continue to update residents on the situation and recommend that everyone listen to their trusted sources.

During the Mauna Loa volcano eruption, many flights were delayed, cancelled, or diverted. The eruption caused volcanic ash clouds which can reduce visibility and damage flight controls. The ash clouds may also carry volcanic gas downwind. If you’re planning to fly to Hawaii, check with your airline about possible disruptions.

Mauna Loa is the world’s largest active volcano. It consists of a subaerial part, which extends 75 miles across the island, and a summit area, which is about 120 miles across. It’s located in Hawaii Volcanoes National Park. The volcano is active and monitored by the Hawaiian Volcano Observatory (HVO).

The Hawaiian Volcano Observatory said the eruption was in the northeast rift zone, which is closer to the summit than the southwest rift zone. The eruption occurred after months of elevated earthquake activity. The HVO is monitoring the situation closely, and will post updates on its website.

The eruption began around 11:30 p.m. local time, and reached a height of 2,835 meters (9,300 feet). It was the first eruption of this type in more than three and a half decades. The eruption sent lava flows as far as four miles from Hilo. The lava then entered the Moku’aweoweo caldera, and flows advanced into the northeast rift zone.

Mauna Loa has erupted several times in the past. The largest radial vent eruption took place in 1859. Another eruption occurred in 1877, on the west flank of the volcano. During the 1855-56 eruption, a lava flow covered land that is now within Hilo city limits.

Historically, most Mauna Loa eruptions begin in the summit area. But the eruptions can also occur from vents in the rift zones at lower elevations.

The Hawaiian Volcano Observatory and Department of Energy officials are monitoring the eruption closely. A scientist-in-charge at the HVO said Monday that the eruption is shifting to the northeast rift zone.

Mauna loa has erupted seven times in the last 38 years, and each time the lava flows reached the ocean within hours. The last eruption was in March-April 1984.