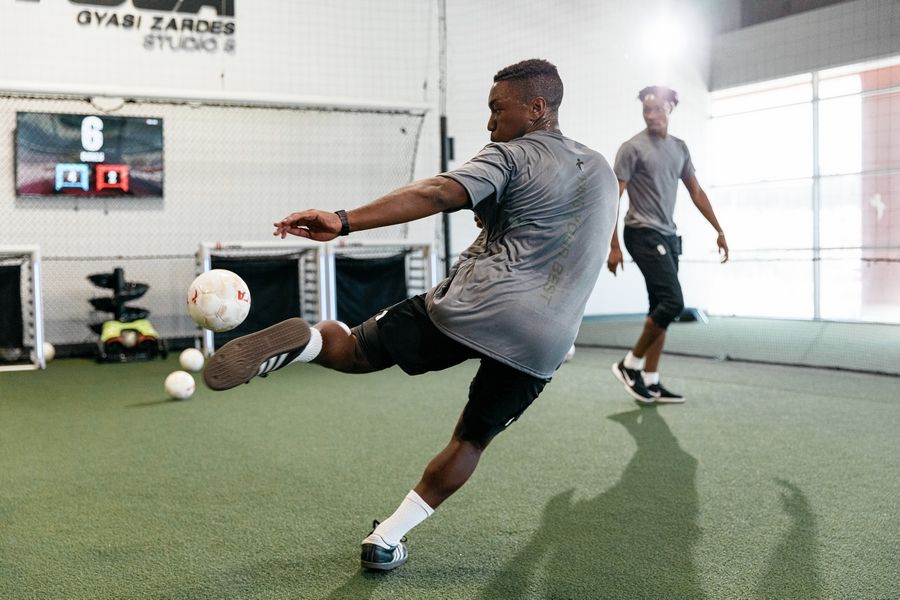 JOGO is a revolutionary player development platform that delivers actionable insights into the best football talent. It can help aspiring players get noticed by coaches and agents by revealing their hidden potential. The platform uses AI, machine vision, and sensor tech to measure a player’s growth over time. It also allows users to see benchmark comparisons across age groups and positions.

JOGO was founded in 2020 and has already been making waves in the soccer community. The company has a team that includes professionals with soccer knowledge, technology experience, and data science. They also have a vast network and a deep understanding of youth development. With their extensive experience, they are well-positioned to revolutionize soccer with technology.

JOGO’s app connects to insole sensors, providing valuable insights into the development of each player. It analyzes a wide variety of player data, including running speed, acceleration, leg distribution, shot power, and time on the ball. This data helps coaches and players set SMART goals that lead to improved performance.

SmartGoals is a revolutionary football training technology that involves a series of interactive training devices that simulate real-life competitive situations by using light signals. SmartGoals are designed to improve players’ awareness, split vision, reaction time, and overall fitness and awareness. This technology is already used by top clubs in Europe, as well as amateur clubs.

The SmartGoals system is a highly interactive training device, which forces players to constantly look around and interact with the environment. For example, players can shoot or run through one of the SmartGoals, which will cause a light to jump to another one. The resulting dynamic training scenarios are challenging for players of all skill levels.

The SmartGoals app also enables coaches to record and analyze player data. It is available online and on the App and contains over 100 football training exercises. It was originally designed for football, but has now expanded to other sports. By capturing the video data, coaches and players can improve their performance and understand the strengths and weaknesses of their players.

Hawk-Eye football training technology uses a camera that detects when the entire ball crosses the line. The camera sends an alert to the referee in less than a second. The technology also helps officials make more accurate decisions, such as on corner kicks and throw-ins. These features allow for faster games and reduced controversy.

This football training technology is used by many teams to help improve player performance. It uses cutting-edge vision processing techniques and high-frame rate cameras. The company has been in the field for 12 years, with a track record of enhancing broadcasts and sports officiating. Founded in the United Kingdom by Dr. Paul Hawkins, Hawk-Eye aims to improve performance and safety.

Hawk-Eye football training technology has already been used in some major sports, including football. It was first used in the 2014 FIFA world cup. Other recent examples include the England vs Pakistan test match, and the 2006 US open. The benefits of using this football training technology in sport are numerous, but there are also some disadvantages.

In late 2006, Hawk-Eye technology was tested by the International Tennis Federation in New York. It passed the ITF’s test for professional use and was even featured on local television in Australia. It was so accurate that it called a tennis ball “out” by 1mm. While the company claims a margin of error of 3.6mm, some commentators have criticized Hawk-Eye’s margin of error.

The Situational Awareness Builder platform, created by G2K Group, enables stadium managers to understand the game environment and help players and coaches become more prepared for potential emergencies. The football training technology platform uses machine learning and AI to connect data from a variety of sources. This allows situational awareness to be visualized on static screens or on mobile devices.

The researchers’ study aims to gain insights into shared situational awareness of an elite football team and its correspondent coach. The researchers suggest that the shared situational awareness among team members determines how each team member reacts to a specific situation. For instance, a team’s decision-making process is dependent on the team members’ characterization of the situation. The team must share similar knowledge, irrespective of overlapping demands. Increasing the number of equivalent player statements is desirable for team coordination.

The PLAYR football training technology is a wearable fitness tracker that is specifically designed for footballers. The technology helps athletes improve their performance by tracking key performance metrics, distance measurements, and heat maps of key on-field action zones. Its app, based on data collected by the sensor, is designed to provide bespoke sports science advice for each training session.

The device has an on-board memory of 8GB and can store up to 1,250 hours of football data. It syncs with a smart phone app, where users can view their stats. The software features heat maps based on GPS data and breaks down full matches into two halves. It also shows a performance comparison of the user with Premier League players.

The software also includes a training plan viewing module and a training goal formulation module. This system is fully integrated and integrates all the processes of football training. It reduces the amount of time coaches spend on each training session and provides objective, scientific reports. The system’s performance is tested and optimized to ensure that it meets all of its goals.