How Long Does it Take to Change a Habit? 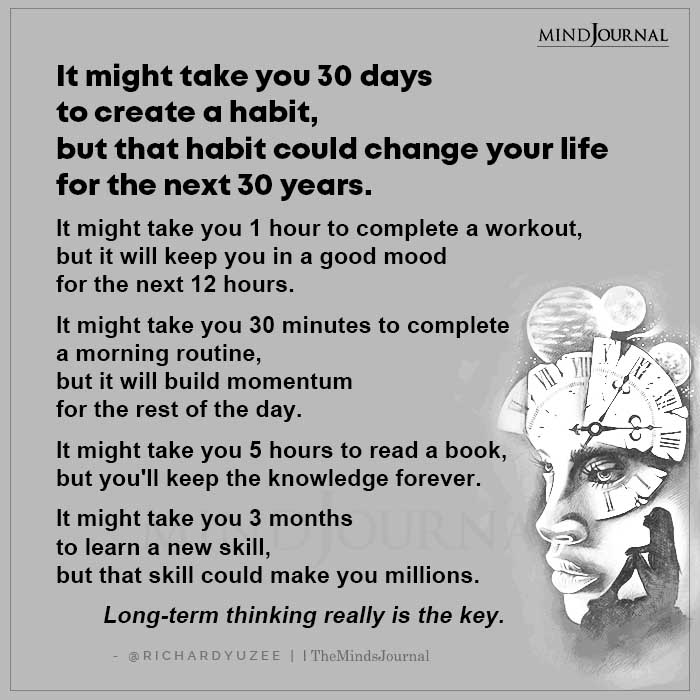 Changing a habit can take time and patience. You need to form a new habit, stick with it, and then repeat the process. In some cases, you may need to work on your habits on a daily basis for awhile before you start to notice a change.

Whether you are looking for a new exercise routine, or simply want to improve your health, establishing new habits is a big part of the equation. To make it a success, you need to think about your long and short term goals and what you can do to achieve them. You also need to establish a supportive environment, and commit to making a few small changes to your lifestyle.

As with anything in life, it will take some effort and time to succeed, but a little bit of determination can go a long way. The most important thing is to focus on the most important parts of your new routine and give it the time and attention it deserves. Likewise, you need to get rid of the things that are holding you back. If you want to lose weight, you have to stop buying unhealthy foods, and start eating healthier alternatives.

There are several other factors to consider, but one of the most important is your mindset. If you believe that changing habits is going to be a struggle, you will likely end up quitting before you even start. You need to be able to accept your shortcomings before you can start overcoming them. If you have a supportive friend, family member, or coach, they can be an invaluable resource. In addition, you can take note of the things that you are doing that are actually helping you to succeed, and do more of those things. This is especially true if you are in a new location. The best way to stay motivated is to keep track of your progress and set realistic goals.

A simple review of the science shows that new habits take time to form. Typically, it takes about two to eight months for an individual to develop a habit. This makes it a good idea to make a list of the habits you would like to cultivate and set a schedule for yourself. You can even enlist the help of a friend to track your progress and offer advice as you go.

Whether you are trying to form a new habit, or breaking a bad one, the process can be difficult. It is important to be consistent and patient. The length of time it takes to form a habit depends on a number of factors. Specifically, the type of habit you want to form, your intentions, and your personality are all important.

The average time it takes to form a habit is about three months, but the amount of time can vary greatly by individual. For instance, a person who has never run may have a tough time forming a new habit. In contrast, someone who has been working out for several years will have an easier time.

The University College London’s Phillippa Lally conducted a study on habit formation. She and her research team observed 96 people’s daily habits over a 12-week period. Each person chose a new habit and recorded their daily behaviors. The researchers found that the habits of a sub-group of participants took longer to form. They also reported that the automaticity of their habits remained unchanged for a shorter period of time.

Maxwell Maltz, a plastic surgeon and author of Psycho-Cybernetics, wrote that a minimum of 21 days is needed to adjust to a new face or behavior. However, a 2009 study published in the European Journal of Social Psychology found that a wide range of variables were involved in habit formation.

The University College London study revealed that some habits take less than 21 days to form, while other habits are more complicated and may take as long as eight and a half months. In addition, the automaticity of a behavior is a key component in habit formation.

Dr. Elliot Berkman, director of the Social and Affective Neuroscience Lab at the University of Oregon, explains the three main factors that impact habit change. He also outlines how habits can be formed.

According to the University College London’s Phillippa Lally, a new habit can take 18 to 254 days to form. It can also take 66 days to become ingrained. While it can be frustrating to develop a new habit, it is worth the effort.

Stick with them for a while

Developing a new habit can take up to three months. If you want to make a habit last, it is a good idea to stay consistent with the practice. If you are trying to break a bad habit, you should be patient and persistent.

According to a study by researchers at University College London, the average time to form a new habit is 66 days. However, some people only needed 18 days, while others needed 254 days.

One of the earliest recognized self-help authors, Maxwell Maltz, claimed that it took 21 days for patients to adjust to a new face or body part. This was in his book Psycho-Cybernetics, written in 1960.

There are many variables that affect how long it takes to form a new habit. This includes your motivation, the type of habit you are forming, and your personality.

The University College London study found that forming a new habit took an average of 66 days, but the exact number depends on several factors. The researchers based their estimates on data from a sample of 96 people over a 12 week period.

Some habits, such as smoking cigarettes, can be difficult to quit. For these people, replacing their habit with a healthier alternative can help them quit. For example, instead of smoking, they could replace their habit with gum. They could also avoid situations where they were likely to be exposed to substances.

The right recipe for breaking a habit will vary depending on the habit you want to change. For example, if you are trying to stop drinking, you might need to abstain from alcohol for a few months. On the other hand, if you are trying to lose weight, you can use a variety of tools to help you succeed. For example, you might choose to eat more fruits and vegetables, exercise regularly, and drink less caffeine. These healthy behaviors can lead to a more balanced life and improved health.