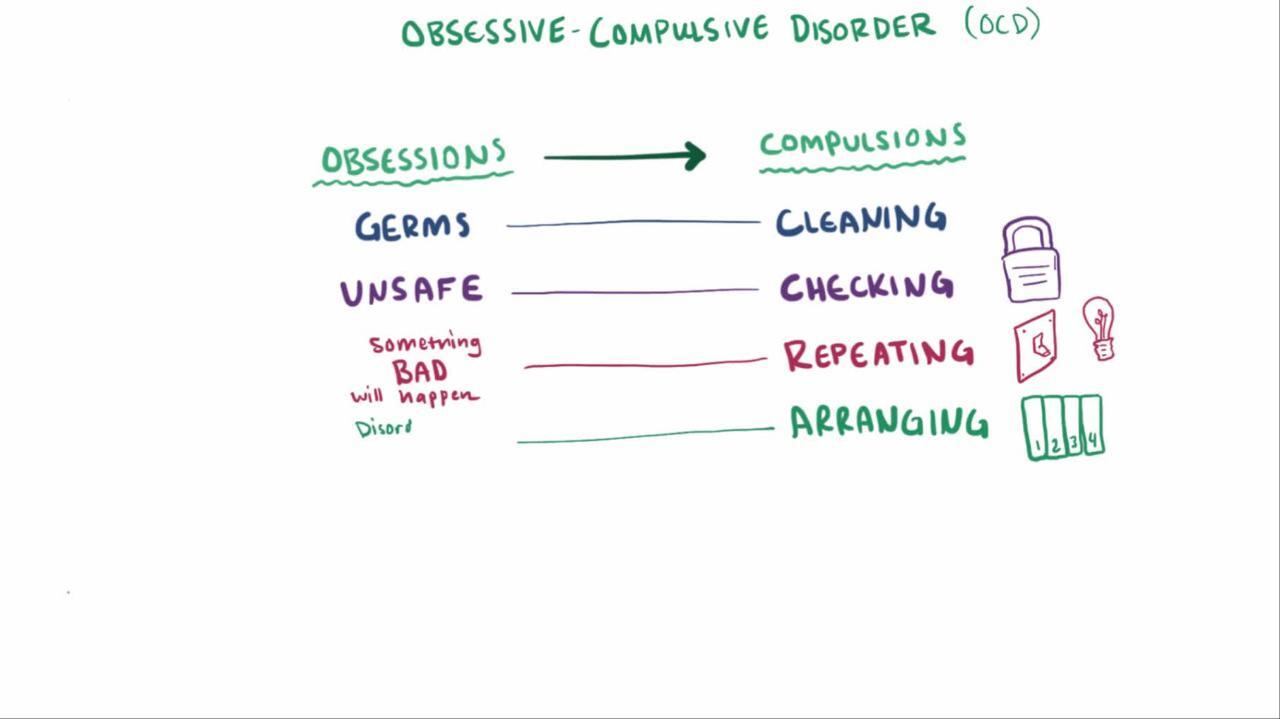 When someone suffers from Obsessive Compulsive Disorder(OCD), they may experience some physical symptoms. These behaviors may be difficult to control, and therapy can help. In this article, we will discuss some of the common physical behaviors associated with OCD, the comorbid conditions that can cause them, and some of the treatments available to help patients.

Obsessive compulsive disorder (OCD) is a mental health condition that causes people to have unwanted thoughts and compulsive behaviors. It can interfere with daily activities and affect other areas of life. OCD can also exacerbate depression and suicidal thoughts.

The most common treatments for OCD are medications and psychotherapy. Medication can help control obsessive thoughts, while psychotherapy helps individuals change their beliefs. Psychiatric medicines include drugs like Paxil, Zoloft and Anafranil. Some of these drugs can cause side effects, so be sure to discuss them with your doctor.

If you or a loved one suffers from OCD, you should seek treatment. Treatments can greatly improve your quality of life.

Cognitive behavior therapy is a type of therapy that aims to change unhealthy patterns of thinking. This type of therapy teaches patients to recognize their thoughts and replace them with more realistic and rational ones.

Cognitive behavioral therapy (CBT) has been found to help people suffering from OCD. CBT can be effective for treating symptoms without medication.

Another type of therapy for OCD is exposure and response prevention therapy. ERP focuses on exposing the fear that accompanies the obsessions and compulsions.

In addition, a support group may be helpful for OCD. These groups provide a supportive environment for people with similar disorders to share experiences and form social networks.

Antidepressants, such as tricyclic antidepressants, can also be used to treat OCD. Side effects can include abnormal urination, nausea and loss of coordination. However, they usually decrease over time.

OCD is a mental illness that affects about two to three million people in the United States. It is characterized by obsessive thoughts and repetitive behaviors.

The symptoms of OCD range from mild to severe. People who suffer from the disease may avoid certain objects and situations. They may also perform rituals and compulsions. These actions are designed to relieve distress but only temporarily.

In order to receive a proper diagnosis for OCD, a person must have persistent and extreme intrusive thoughts. Typically, these thoughts interfere with work, school, relationships, and other daily activities.

OCD can cause people to feel extreme anxiety and intense fear. It is difficult to live with this condition, but treatment can help.

For example, if someone has a fear of contamination, they may perform elaborate cleaning rituals. This could include washing their hands for hours.

OCD can be treated with medication, psychotherapy, and self-care strategies. Depending on the severity of the disorder, a patient may need transcranial magnetic stimulation (TMS), which is a method that helps to reduce anxiety and the symptoms of OCD.

Medications such as selective serotonin reuptake inhibitors (SSRIs) and tricyclic antidepressants can be used to treat OCD. However, these medications can cause side effects. SSRIs are a type of antidepressant and tend to be effective only after a few weeks of use.

OCD can be treated through cognitive behavior therapy, which aims to help patients change their beliefs and behaviors. It can be difficult to overcome obsessions and compulsions, but using the right support can make a huge difference.

Obsessive Compulsive Disorder (OCD) is a disorder that causes people to have obsessive thoughts and compulsive behaviors. It can affect a person’s life in many ways. They may be afraid of germs, or feel that their own bodies are not symmetrical. These symptoms can interfere with everyday activities, leading to isolation from friends and family. Symptoms can worsen over time. Getting diagnosed early is essential.

People with OCD are more likely to have other comorbid conditions. This includes disorders like depression and anxiety. As a result, treatment is often complicated and difficult to maintain. A common comorbidity is borderline personality disorder.

The comorbidity between OCD and depression can lead to social isolation, reduced activity levels, and a diminished quality of life. However, both illnesses can improve when the other is under control.

Comorbidity is important in understanding the course and treatment of both illnesses. Treatment can improve a person’s ability to attend school, pursue leisure activities, and function at work.

Although studies have found associations between specific physical diseases and mental disorders, more is needed. Researchers must continue to investigate etiological pathways of OCD.

Studies show that the presence of one or more comorbidities can increase the risk for disability and reduce the quality of life for those with the condition. In addition, it can impede a person’s ability to live independently.

If you are experiencing some common physical behaviors associated with OCD, you may want to talk with your health care provider about how to treat them. There are many options, from medication to therapy. Typically, psychotherapy is recommended as part of a treatment plan.

Compulsions are repetitive behaviors that people with obsessive compulsive disorder engage in in order to relieve themselves of anxiety. Common compulsions include repeatedly washing or checking items for signs of harm. Other compulsions are refusing to touch objects that others touch.

When left untreated, OCD can lead to feelings of loss of control, which makes it difficult to function in everyday life. Symptoms can be extremely distressing and lead to social isolation.

The most common treatment methods for obsessive compulsive disorder are medication and psychotherapy. You can learn more about this treatment at the International OCD Foundation’s website.

Cognitive Behavioral Therapy is a type of psychotherapy that focuses on changing the beliefs, patterns of thinking, and behaviors that contribute to the symptoms of obsessive compulsive disorder. In this kind of treatment, patients are encouraged to write down their thoughts and behaviors.

Deep brain stimulation therapy can help when dealing with physical behaviors that are associated with obsessive compulsive disorder (OCD). These symptoms often make it difficult to have meaningful relationships, participate in leisure activities, and work. The condition can also negatively affect your cognitive capacity.

DBS involves surgical implantation of electrodes in the brain. These electrodes deliver electrical pulses to targeted areas of the brain. Brain stimulation can enhance mood and other mental functions.

It has been reported that DBS may be effective in treating a variety of psychiatric conditions, including addiction and depression. Although the treatment is often used along with medication, it is not considered a permanent solution.

Despite the evidence supporting the effectiveness of DBS for a number of psychiatric conditions, the method of treating OCD is still unclear. Some experts believe that DBS should be used only for severe cases.

In addition to treating the physical symptoms of obsessive compulsive disorder, cognitive behavioral therapy can help people learn to cope with their obsessive thoughts. Patients can be taught to gradually expose themselves to situations that cause their fears and avoid committing to compulsive behaviors.

Medication can help when dealing with the physical behaviors associated with obsessive compulsive disorder (OCD). It may not cure the symptoms, but it can make them manageable.

A person’s healthcare provider can provide information about the various types of treatments available for OCD. Treatment plans may include medication, psychotherapy, and lifestyle changes.

Anxiety management techniques can also be used to alleviate some of the symptoms of obsessive compulsive disorder. These include slow breathing, hyperventilation control, and mindfulness meditation. They require regular practice and can be very effective when paired with cognitive behavior therapy.

Cognitive behavioral therapy is a type of psychotherapy that teaches people how to replace unhealthy thoughts with more positive ones. It is a technique that is most commonly used to treat obsessive compulsive disorder.

Exposure and response prevention is a specific form of CBT that focuses on exposing a patient to the triggers that trigger the symptoms of obsessive compulsive disorder. This can be done in a group or one-on-one setting. The patient is gradually exposed to the object or thought that triggers the symptoms.

People who have obsessive compulsive disorder often feel that they have no control over the thoughts and behaviors that lead to their condition. This can create social isolation. Support groups are helpful, as people with the disorder can learn from others.

If the OCD is severe, residential treatment programs may be a good option. Some medications have side effects, so it is important to check with your doctor before taking any drugs.

If you like what you read, check out our other articles here.obsessive compulsive disorder