What is a Doomsday Prepper? – Preparing for the worst, hopeful for the best! 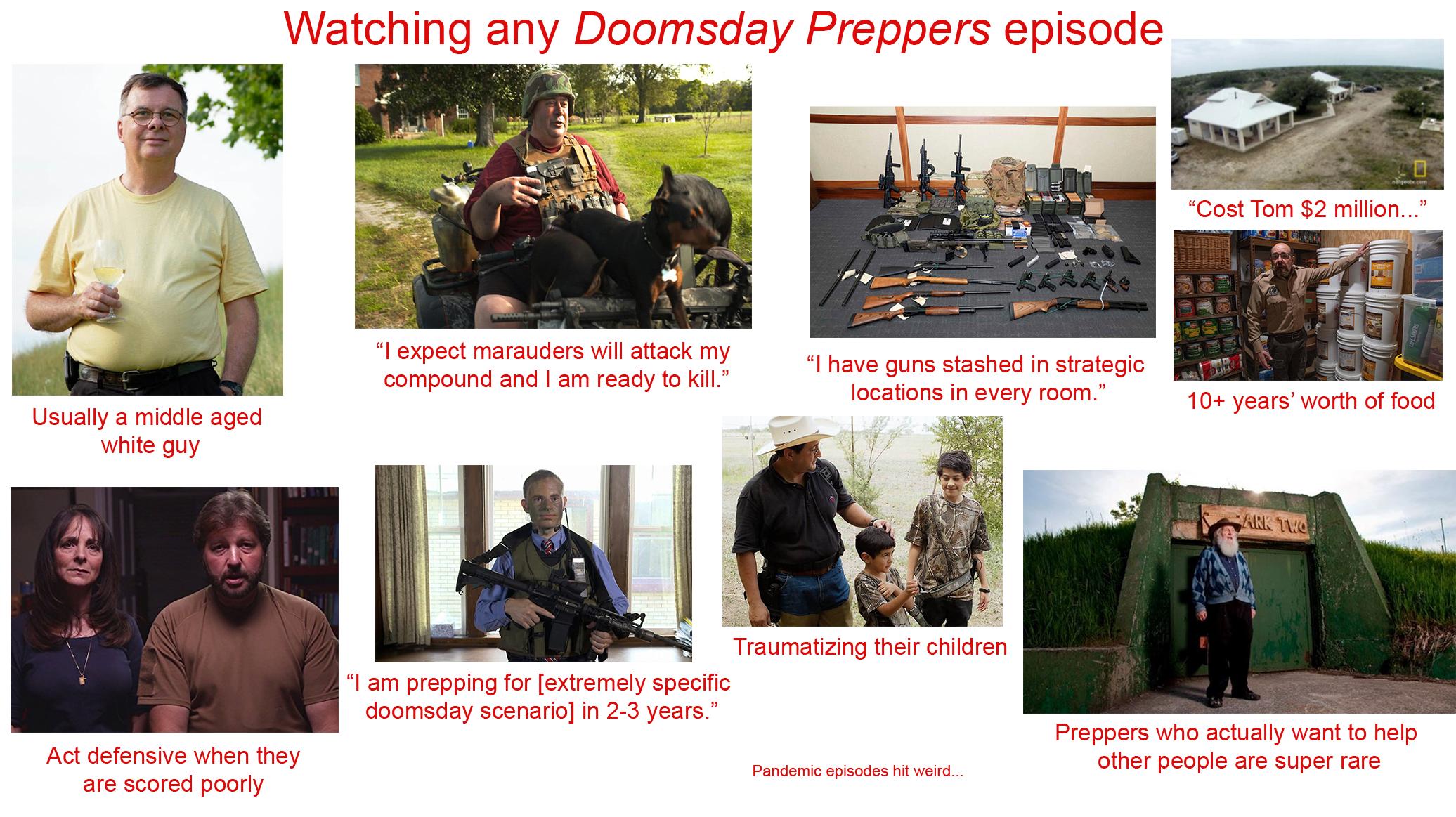 A Doomsday prepper is a person who prepares for an apocalyptic future by stockpiling supplies and resources. They often live in elaborate underground bunkers or ultra-remote fortified compounds. They have mountains of supplies and plan for self-sufficiency, including power generation and food ecosystems.

Doomsday preppers are a growing trend in the United States. These individuals are stockpiling supplies and medical supplies in preparation for a potential disaster. These people are also promoting self-reliance. According to a survey, forty per cent of Americans believe that stockpiling resources is more important than a 401(k) plan.

Doomsday preppers are stockpiling weapons, food, water, and water. Essentially, they’re stockpiling whatever they need for life after a doomsday event. Whether the disaster is natural or man-made, many people are preparing for a future without utilities or a functioning government.

The survey found that more men than women stockpile resources for a possible disaster. However, there are some differences. Men tend to spend more money on disaster supplies, while women tend to spend less on emergency supplies. According to the survey, the millennial generation is the most prepared, followed by Gen Z and Gen X.

The prepping movement is a growing phenomenon, with hundreds of thousands of people around the world taking steps to prepare for a collapse of society and the economy. Estimates suggest that there are as many as three million preppers in the United States alone. These numbers are rising quickly.

They prepare for self-sufficiency

The Doomsday Preppers show on National Geographic explores the need for self-sufficiency during times of crisis. The show highlights the need to prepare for major disasters and power outages. A major hurricane can knock out electricity and leave store shelves bare. Without supplies, you may have no option but to move.

Preppers tend to despise consumer-centric technology and invest their time and money in ancient and primitive technologies. Their survival skills include farming and fire-making. Moreover, common sense is their currency. In the event of a major disaster, a prepper is likely to be a generous and self-giving person.

The concept of Doomsday preppers has been gaining popularity as the concept of survival has become ingrained in American culture. In 2012, the National Geographic Channel premiered a show on the subject, which attracted over four million viewers – the most popular show in National Geographic’s history. Furthermore, a recent poll revealed that forty percent of Americans believe stocking up on emergency supplies is a more prudent choice than a 401(k) retirement account.

However, the concept of self-sufficiency is often counterproductive. Some preppers seek to reset the world to its former state. Others aim to create their own independent communities. It is important to understand the differences between doomsday preppers and “nonpreppers.”

While some preparations are easy and don’t require a lot of money, others require skills. In addition, some activities require an investment of time, labor, and money. There is no set timeframe for achieving self-sufficiency. Depending on your circumstances, you may need to prepare in stages.

While the majority of preppers plan to bug into their homes and prepare for self-sufficiency, others opt to move to a bug-out retreat. In both cases, home production and food storage techniques can help reduce food bills. A family food store, as well as home-made foods, can greatly reduce the cost of food. Many preppers also choose to live within their means and avoid incurring debt.

While many people do not choose to build their own homes for self-sufficiency, a few serious doomsday preppers build their own silos, which were designed to withstand nuclear attack. These structures are designed to hold up to 75 people. The space is equipped with food to last for up to five years. The silos are also equipped with hydroponic vegetables grown under grow lamps. Additionally, the residents of Hall’s silo can access the outside world with SWAT-style trucks.

Taking precautions can reduce stress and allow you to concentrate on your hobbies. By stocking up on food, water, and other supplies, you’ll have fewer trips to the grocery store and enjoy more free time. By preparing in advance, you’ll be able to stay safe and survive in the wilderness or a collapsed world.

The Doomsday Prepper movement has many different subgroups, with widely different beliefs. Some of these groups focus on the Rapture, while others believe it will follow Tribulation. Some are completely pacifist, while others have armed groups. Regardless of the type of group, they are all preparing for self-sufficiency, and some may even be practicing self-defense.

They plan to help when humanity is down

Many Doomsday preppers are driven by the need to help others. They have convinced spouses that the world is about to come to an end, and many plan to use the impending downfall to help those that have not prepared like they have. Their dream is to be able to donate their excess materials to help others survive.

Some of them are concerned about global warming or an impending global famine. Others are worried about the collapse of international travel routes, supply lines, and the economy. Others fear the collapse of society. The vast majority of modern prepping, however, is not based on fringe ideologies. It is built on the fears of a disaster, and it aligns with popular political sentiments.

FTX is a renowned cryptocurrency trading firm, founded by Samuel Bankman-Fried, an American entrepreneur and investor. He is also the

Read More »
December 13, 2022 No Comments
Geoengineering and the negative effects on the climate