What is Impulse Control Disorder? 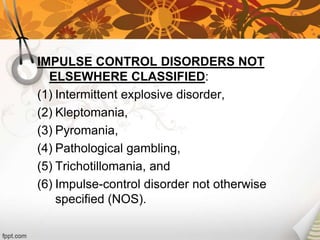 Impulse control disorder is a serious mental disorder that affects the ability to regulate one’s impulses. People suffering from the disorder may experience impulsive behavior at random and may also exhibit personality problems or substance use disorders. They may also have mood disorders, anxiety, or depression. Some researchers have found that up to 60% of individuals who suffer from kleptomania are also affected by obsessive-compulsive disorder. In addition, people who suffer from impulse control disorder also have higher than average rates of depression, bipolar disorder, and generalized anxiety disorder.

Impulse control disorder is multifactorial in origin, but genetics is thought to play an important role. Children with CD may also have a history of substance abuse or mood disorders in their parents. These disorders are also linked to a dysfunctional family environment. Children with impulse control disorders are likely to develop other addictions later in life, so addressing the problem early in life is important.

Certain personality traits increase the risk of developing impulse control disorder. For instance, individuals with kleptomania are more likely to have problems relating to others. People with pyromania may have a problem with executive functioning and memory, as well as problems with attention. Research on impulse control disorders is ongoing, but some early signs indicate that it can be caused by genetic factors.

There are several treatments for impulse control disorder. Psychotherapy may help patients identify their triggers and learn healthy ways to deal with them. Medications may also help.

Keeping a diary of impulsive episodes can help you identify patterns and triggers. By identifying these patterns, you can identify what medications or therapies are helping you control your episodes. You can also educate yourself about the disorder and help your family members better understand the disorder. You may be surprised by the range of medications available.

Impulse control disorders are among the most common psychiatric disorders and can have serious consequences. People with these disorders often report significant impairments in occupational and social functioning and face legal and financial problems. Despite this widespread prevalence, the disorder is often poorly understood by the general public, and treatment is often difficult to find. Some medications have proven to help some people manage their symptoms, but research on long-term treatments is limited.

Treatment options for impulse control disorder range from behavioral therapy to medication, but some people also require inpatient treatment. Inpatient care is especially beneficial for people with impulse control disorders, because it provides a safe place for recovery. It also allows physicians to address other mental health issues that might affect a patient’s behavior, such as substance abuse.

Impulse control disorder can be treated in a variety of ways, including therapy, medication, and combination therapies. While researchers aren’t able to pinpoint a single cause of the disorder, a number of factors appear to contribute to its development. Some of these factors include genetics and environmental factors. Additionally, individuals who have comorbid medical conditions are at a higher risk. Moreover, poverty and a history of abuse also contribute to the development of impulse control disorders.

Impulsivity is a common symptom of several psychiatric disorders. Although not all people who exhibit this behavior meet criteria for a mental health diagnosis, impulsivity should be considered a cause for concern when it impairs functioning or has negative consequences. In this case, pharmacological interventions for impulse control disorder can be helpful.

Impulse control disorder can be difficult to diagnose. To ensure the diagnosis is correct, it is necessary to ensure that the symptoms of the disorder are due to uncontrollable urges. Patients with the disorder should talk to their physicians to seek diagnosis. The doctor may perform a psychological evaluation in order to rule out other mental illnesses. In some cases, the doctor may prescribe psychiatric medication, including mood stabilizers.

Counseling is another option for treating impulsivity. During this session, counselors can explore the client’s history to determine whether impulsivity is the primary problem or a symptom of a more general issue. They should also discuss the specific situations that trigger impulsive behaviors.

Impulse control disorder is a mental health condition characterized by impulsive and harmful behaviors. These behaviors include excessive spending, substance abuse, and compulsive sexual behavior. They can also result in depression and thoughts of suicide. Fortunately, there are treatments available for impulse control disorders.

Impulsivity is a symptom of many other mental health conditions, including substance abuse and personality disorders. While it is not included in the DSM-IV-TR criteria for impulse control disorder, researchers have found a strong correlation between substance abuse and impulsivity. Those who abuse multiple substances have been found to be more impulsive than people who do not abuse substances. Other major mental illnesses also tend to increase impulsivity, particularly in psychotic states. For instance, Bipolar Disorder is commonly associated with impulsivity during the manic phase.

An impulsive episode diary can be useful in diagnosing a condition. It can also help identify patterns, triggers, and medications. Keeping a diary is also helpful in learning more about impulse control disorder, enabling a sufferer to become more educated about the disorder and better manage it.